The Lord, the Lady and Lammastide


It will be Lammastide on 1st August, one of my favourite celebrations. The word comes from the Anglo-Saxon for Loaf Mass (hlaf-mass) and celebrates the first bread made from the first of the grain harvest - the blessing of the first fruits. There's a 'Celtic' form of the feast too, Lughnasadh. Depending on regional variation of tradition and who you ask, these may or may not approximate to the same thing - given that they fall on the same day and focus on harvests, sun and community celebration.
It may be that Lughnasadh is a bit more 'pagan' and Lammas is a bit more 'church', but in rural traditional societies of pre-literate times, I suspect there was a good deal of cross-pollination. 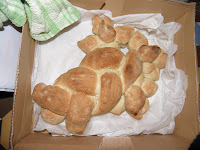 There still is a good deal of cross-pollination, actually, although politely wiped up by some, to suggest clear 'either/or' boundaries so we all know where we are.
Take the word 'Lord.' 'Lord' is used with reverence, and I mean no disrespect. In the past and in other places, and this is a subject for another post, it was/is used as a subversive and courageous statement of loyalty to God rather than an earthly power, that could land one in a lot of trouble.
But 'Lord' is an English word ( Scottish variation, Laird) with a good old Anglo Saxon root. (The first translations of the Bible made for indigenous speakers of the British Isles, were in Anglo Saxon, long before William Tyndale died for his pains.)

'Lord' is also a word that causes theological mushiness, to my mind. In Christian circles it gets used interchangeably of 'God Most High' and of Jesus - in some liturgies it is sometimes not clear who we are addressing at all. But the distinction matters; it seems highly improbable to me - but a matter for debate for some - that Hebrew-speaking contemporaries of Jesus would use the same title for Jesus as for the Most High God, regarded by Jesus himself as a practising Jew with utmost love and reverence: 'Our Father, hallowed be your name'. In Judaism the most holy name is not spoken, and 'Adonai ' (in English translation Lord or LORD) is a Hebrew title used as a reverential substitute. Kyrios, the Greek equivalent, is used of God but also of powerful male human beings, and since early Christians tended to rely on Greek translations and wrote their own material in Greek, some of the confusion can be traced back to this formative time.
We use Lord, like Kyrios, of the Divine, and of human beings, and of Jesus who is, according to tradition, both. It's worth pausing to consider what - and who - we mean when we use the word. It is a male title of respect. It therefore seems quite appropriate to use of a male human being, such as Jesus, but today, do we have to have a gendered title to speak of the Supreme Being? The Liberal Judaism prayerbook has already addressed this, and uses non-gendered, inclusive language of God. 'The Eternal One' is used where we might expect to find Lord.

Lord (and Scottish Laird) comes from the Anglo Saxon word Hlaford. The Anglo Saxon theologian-translators decided 'Hlaford' was an appropriate choice to render the equivalent concepts implied by biblical writers, and in many ways it was, as long as we remember the etymology of the word.

Hlaford  is made up of the word for loaf, hlaf, and the word for a guardian or protector, weard - some letters got lost or morphed along the way. The Lord is the one who looks after the bread supply, secures its production and ensures its distribution. Generosity is an essential quality of an Anglo Saxon Hlaford. We might find here a pleasing Eucharistic association.

But it also illustrates the utter importance of the grain cycle for a people whose staple diet was bread. The line in the 'Lord's' prayer, 'give us today our daily bread,' would resonate with these people, and it's what a benevolent hlaford does.
In the Christian story, the bread-guardian goes further: he is the bread, he is the grain cut down and bound up, threshed with rods, exposed to the elements and trussed up in a shroud-sack, then placed in the dark ... from which he bursts forth in new life. He is self-giving. He is the dying and rising one. Throughout the Gospels, Jesus's teachings are full of references to the grain cycle, it is one of his favourite illustrations. Jesus is Hlaford.

As with so many human titles, the genderedness of 'Lord' implies a binary which adds to the complication when speaking of God. Where there's a Lord, folklore and fairytale insists there must be a Lady somewhere about. Since Biblical faith is monotheistic, we, like the prophets of old,  run into problems - God's aloneness can sound lonely. People throughout the ages have woven consorts and other beloved companions into the Divine story. In some strands of Christianity, it's Mary, Mother of Jesus, who is 'lady,' and there are many folk legends concerning Mary and the grain cycle. In other strands, Mary Magdalene is cast as lover, or holy Wisdom is emphasised, a feminine personification of the Divine. But 'God Alone', divine aloneness, may not be loneliness but Oneness - completeness, not lonely but joyous, not excluding everything else but encompassing it. Some feel that sexual union and erotic love express the mystery most deeply. (Some feel that it seriously doesn't.) 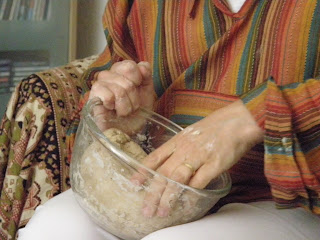 But what does the word 'lady' mean? Once again, it has an Anglo Saxon root hlaefdige: hlaf again, which means bread, and dige pronounced di-ye, related to the activity of kneading dough - another gendered activity in ancient times. Wherever the grain grew, grinding and kneading became womens' work. And there we have it - some might feel the hlaford to be superior, perpetrating the age-old patriarchal pattern. But Jesus himself said that the reign of God is like a woman kneading dough (Luke 13:20-21). The hlaefdige, the lady, gives us an insight into Divine power and creative presence on earth. Can we really do without her? If not, how do we express her rightful belonging within the oneness of God, in a way that has integrity, within our faith tradition?