St Non's holy well - finding the Feminine in the landscape 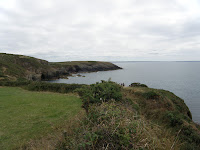 We're just back from a really wonderful campervan holiday in Wales, visiting among other places, Brecon, St David's, (where my son is currently part of Festival Arts, performing King Lear and a family play, 'the Man whose Mother was a Pirate'), then on to St Govan's Head.

I particularly wanted to visit a favourite place of mine, St Non's chapel and holy well, which are to be found on the cliff tops a mile to the south of St David's. St Non is the mother of St David, patron saint of Wales, and to my mind, the more fascinating of the two. Although a nun, she was raped (or seduced,  depending which story you listen to) by a visiting nobleman. Non was obliged to leave the safety of the convent while pregnant and eventually gave birth alone in a terrible storm, on the cliff top. 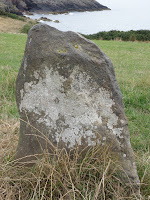 It is said a stone on which she leaned during her labour still bears the impression of her handprint.  We thought it might be this one but are open to correction ... 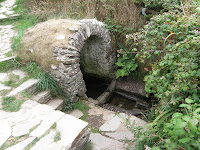 At her feet, a spring is said to have appeared, to which many used to make pilgrimage for healing. It's housed in a simple stone well. 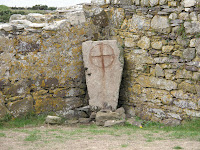 The old chapel is in ruins, a simple Celtic cross propped up in the corner,
but a short distance away a more recent chapel has been built, close to a retreat house. The location in bleak in the winter, but in the summertime, swallows make a home in the rafters.

the chapel is particularly interesting because of its feminine focus. While we might expect the central stained glass window above the altar to be dedicated to St Non, she is not alone. To her right is the better known St Bride or Brigid of Ireland, the first woman, so legend has it, to be ordained a Bishop (see another of my posts, the Good Shepherdess), and to her left, the lesser known St Winifred, also of Wales. 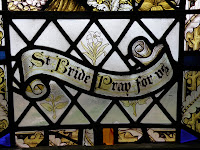 These three Celtic holy women are accompanied by a particularly dynamic statue of Mary with child.
In short, it's all women up front around the altar. There are a couple of male saints on other windows, David being one, but far less prominent. I find this quite refreshing - it's one of the things that draws me to the place.
But I also find the landscape itself quite intriguing, because the features of the location are older than the Christian tradition and to me, they too have a distinctly feminine feel.

There's something about this stretch of cliff around St Non's Bay, perhaps more apparent to travellers coming to pay their respects by boat rather than by land. A pilgrim would know which narrow cove to navigate towards as they made their way cautiously around the rocky coastline, because it lies between two distinctive rock arches, one to the left and one to the right of the spring, up on the cliff. 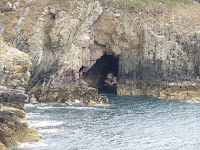 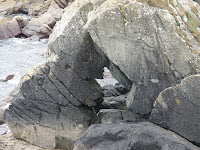 The rocks in one of the easiest places to scramble ashore - from a small boat at least - are a strange, deep reddish purple, shining blood-like with the sea spray. 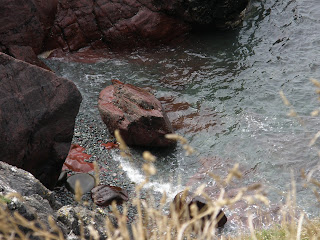 It occurs to me that this stretch of coast might have been associated with the feminine for a very, very long time. I see a connection, I suppose, (I have had a lifelong fascination with the prehistoric) with ancient stones such as Cornish Men-anTol, which seem (to me) to represent simply and starkly, male and female elelements (but make your own mind up!):
I'm sure the rock-arches of St Non's Bay were there long before Christianity, so was the spring, and so were the coves, cutting into the cliffs. Ancient people gravitated towards this place because of the special features they saw in it, and perhaps the spiritual presence they felt there: I can well believe it was a sacred place already, when Non came here to give birth. I wonder if it was sacred to the Femimine Divine, an auspicious place to birth, a place where Non felt safe, empowered, even though in human terms she was alone. 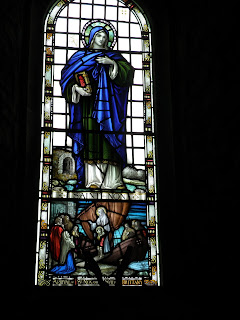