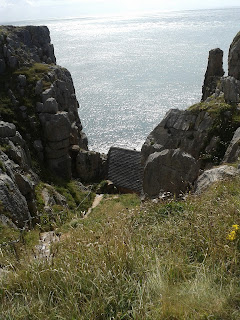 St Govan's Chapel is a tiny 13th or 14th century chapel wedged between the cliffs of a creek, opening out on the sea of Pembrokeshire, Wales. It is built on a much older foundation, around 6th century - 'Celtic'. You can just see the roof in the photo on the left. We decided to make it the last stage of our holiday the other week, as a kind of pilgrimage or time to reflect, before heading home. I'd been some years ago and knew it was special, but this time, I saw things I hadn't noticed last time ...

We had already been to St Non's well and chapel, and been struck by the sense of the Feminine Divine in the place - see my earlier post, St Non's Well - including the presence of two rock arches flanking the holy site. Well at St Govan's, there are also two rock arches, one on either side of the gap in the cliffs, which (I'm guessing so by all means correct me) was once caused by water erosion from a once strong stream which used to run beneath the location of the chapel and the well further down, but which has now dried up.

These were two impressive rock arches and I found myself sitting looking out to sea, with my back to the chapel, one arch on my left and one on my right, and wondering - again - if there had been some ancient attraction to this place, and whether folk had come to sit like us, even before there was a chapel, because of the place itself. There had been a spring, after all, which used to bubble up through crevices and flow on down to the sea, and the steps are worn near the old well-housing, by the feet of travellers seeking healing.

The chapel itself is tiny and interesting. East-facing to greet the rising sun, it has a small well hole in the floor which I thought might just catch the winter midday sun. Above that is an alcove where someone had sprinkled ashes, and to the right, below the tiny 'dawn light' window, a stone altar, alleged to contain the bones of Govan himself.
Adjacent to the altar is a doorway and through here, according to legend, is a crevice where Govan hid from raiders. There are rib-like marks in the rock, which closed around him until danger passed. But the crevice smelt like a urinal, I was saddened, and decided to come back the next day to clean it.

This we did! Early next morning we carried 2 litres of water from the campsite and washed the rocks down, singing Taize chants in Latin, under our breath. Something about the place made us feel it would 'remember' sung Latin and feel soothed.
As I washed the crevice where Govan was said to have hidden, I noticed something. The ribs are just part of the story - below the ribs, is ... well, what do you see?

I saw a female figure, as tall as myself, a mature woman in the rock, upright, naked, wide-thigh'd, arms behind her back, reddish against the grey stone. How had I possibly missed her when I visited before? But it seems countless visitors have been overlooking her for centuries, looking just above her head at the rib marks. I've never heard anyone mention a 'goddess' behind St Govan's - yet she's been here all the time, way older than the chapel.
Who did see her? Who did come here to visit her? Who told the tale for the first time, of her protective embrace of a poor frightened man, fleeing for his life? How could this place not have been sacred to the Divine Feminine, with this figure in the rock?

I left Wales feeling I had been given a gift. There's a verse in the Bible that springs to mind:
You were unmindful of the Rock that bore you;
you forgot the God who gave you birth.
Deuteronomy 32:18

I don't want to forget anymore. I want to remember.