on the trail of the Green Man

We spent some lovely hours in and around Tewkesbury Abbey this weekend, including the 11am sung Eucharist with a fine sermon and sublimely executed liturgy. I'm not always a big fan of large eclessiastical buildings, but the light seemed to play with the architecture & paintwork and for a while I could imagine the pillars as forest tree trunks, branches meeting in the sky-roof, each intersection marked with a carved nodule. 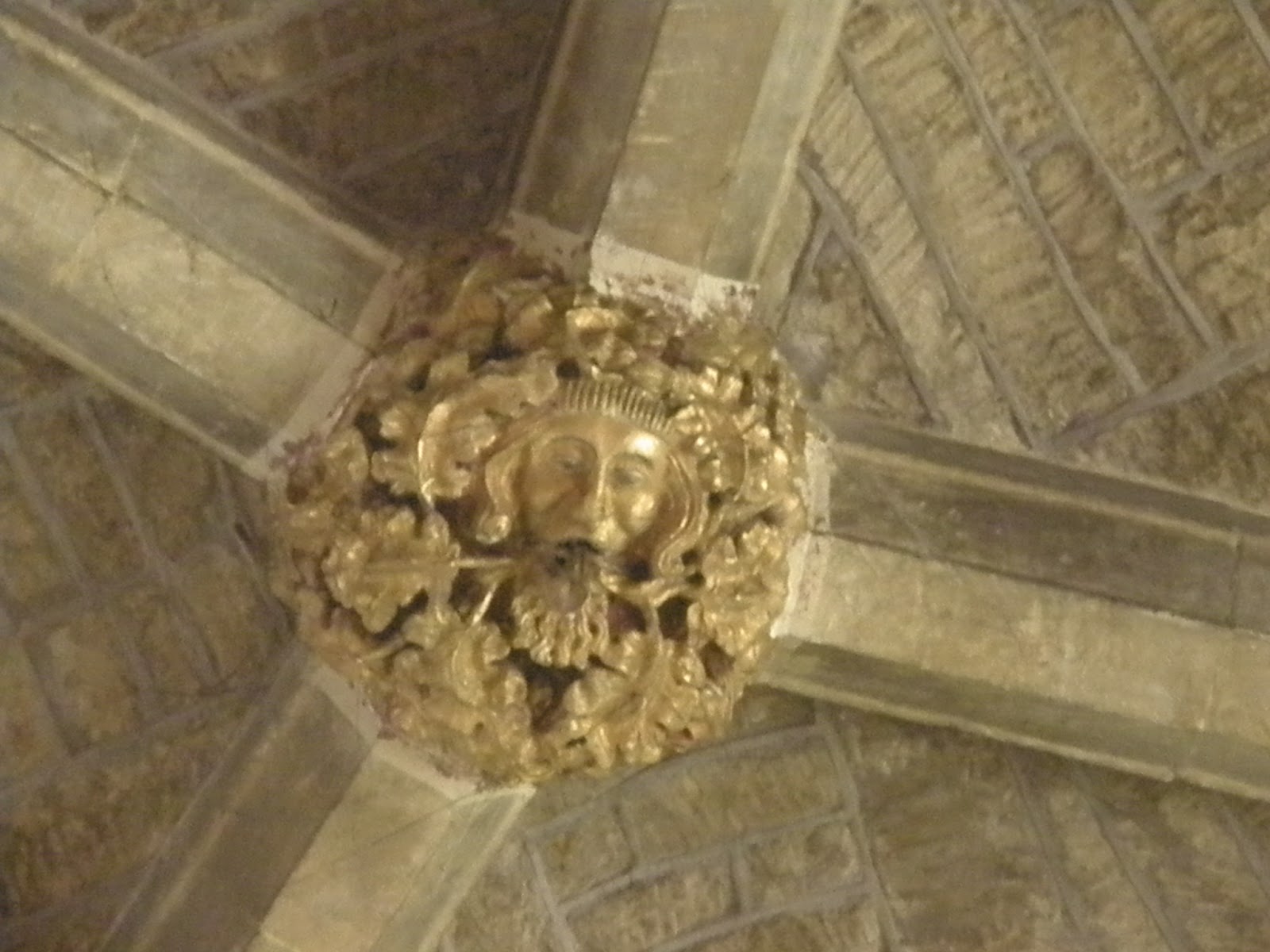 These nodules or roof bosses are worth having a good look at. In Tewkesbury Abbey, apparently, over 50 of them are carved with Green Men - or more correctly, as the leaflet points out, 'foliate figures', as there are also green ladies and lions (I found lions but I'm not sure if any of the ones I spotted were female, they are quite high up!)

One of the things I really love about Green Men in churches (and I wrote a reflection on it in The Healer's Tree) is that nobody really knows what they are doing there, although plenty of people offer all sorts of suggestions.

Foliate faces are ancient and can actually be traced back across the old trade routes (like the Three Hares motif, see one of my other posts), as far away as the temples of India. Although they look very 'English countrysideish', they, like trees, know no borders.

A theory is that travelling craftworkers dragooned into crusading, noticed the designs and brought them back with them, since it's around this time that they start appearing in English - and other European - churches. That might tell us how they got here, but not why they found their way into churches of all places.

But then there are also suggestions which allow for a different world-view, about the church building representing the whole of creation, the high roof expressing the expanse of the heavens, and the inclusion within that space of all that is ... words of inclusion, welcome, belonging... and the bond between humanity and the natural world. Wandering round Tewkesbury Abbey, the idea that the architects and craftworkers who built the place thought so inclusively, seemed quite plausible; the roof bosses bring myriad expressions of life together with illustrations from the Bible and glorious angels, joyously and with humour and reverence. Although I couldn't get to it as the chancel gate was locked, the boss directly above the high altar is (or so it seems to me, correct me if I'm wrong) a golden Green Man. Would he really have been allowed so 'high up' unless he were welcome? 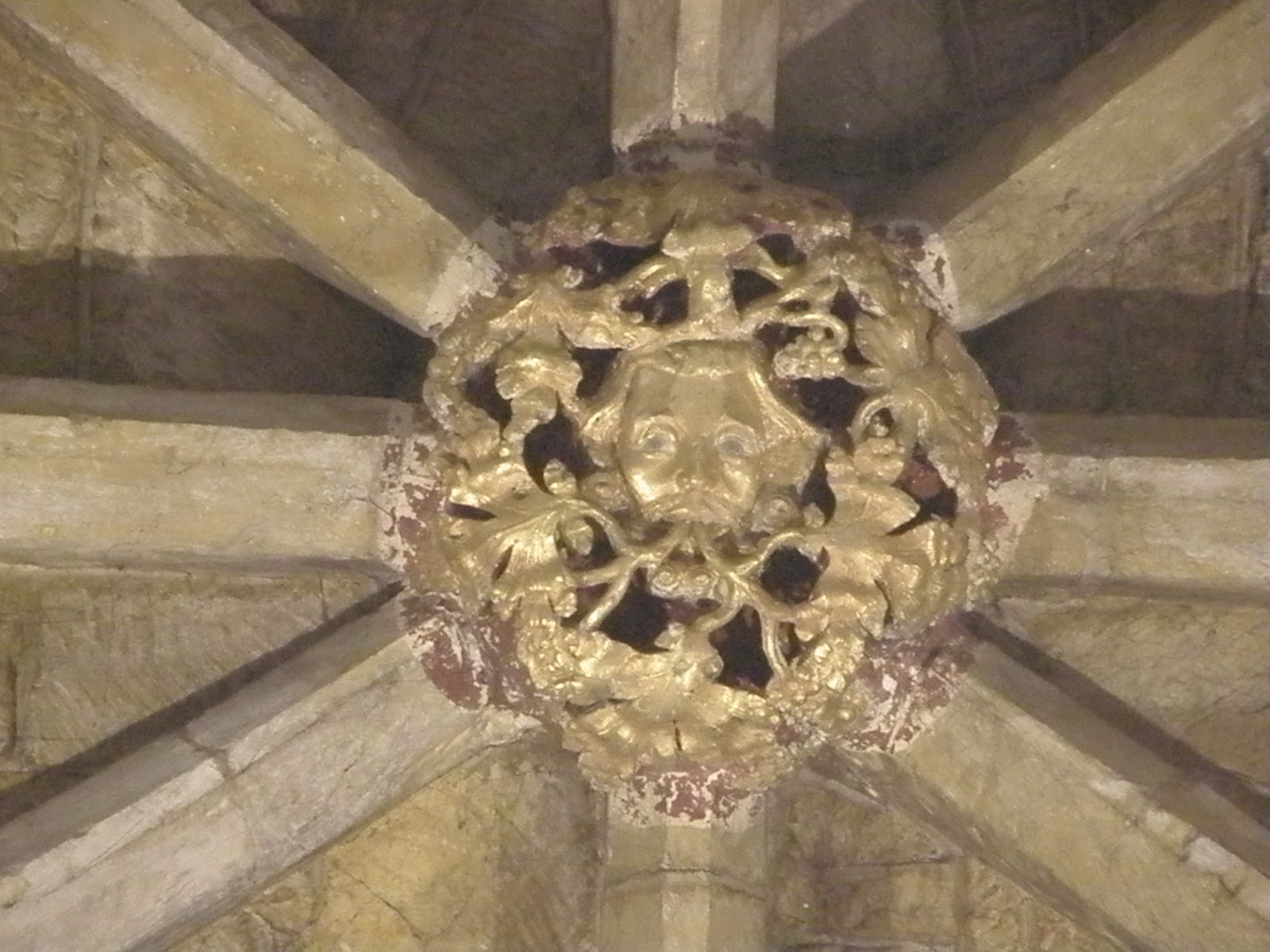 Those (and there are some) who want to suggest that the Green Man represents a sinful, lustful, bestial or amoral aspect of fallen humanity, need to look quite closely. Among the bosses, quite a few show vine leaves and bunches of grapes flowing from the mouth.

In such a case, is the artist not using this motif, known and loved across so many lands, to illustrate the words of Jesus from John's Gospel,
'I am the true vine ...' ? (John 15:1)
Was the artist not offering the Christ to an illiterate laity? And if one boss can be seen as a Gospel proclamation, can we not hope to find Christ in the others too, should we wish to interpret them in such a way? 'No!' you might argue, 'It's Bacchus or Dionysus, it's a picture of Pagan revelry ...' Well, see it that way if it means more to you, but we do have a choice. I don't think there's one 'right' answer to how we should read these characters; there's great freedom for us to make our own minds up.

The Green Man is not the only enigma in the church. It's not the only instance of choice or freedom of interpretation either. As with so many things, the way we choose to interpret such archetypal symbols as these, in the end, I think, says more about what's going on in our own hearts and minds, than any absolute 'reality.'
There seems to be so much agonising, so much questioning about belief among many of us spiritual seekers, as though there is a deep need to get it right and work it all out, cerebrally - but - being Biblical for a moment - God sees the  heart (1 Samuel 16:7). Never mind the theories, what's your gut reaction to a face spewing out leaves? How does it move you? Unease or delight? Reassurance or challenge? Conflict or peace? Acceptance or rejection? Fear, or love? What place is there in your faith, your heart, your church for this ancient and mysterious foliate figure? 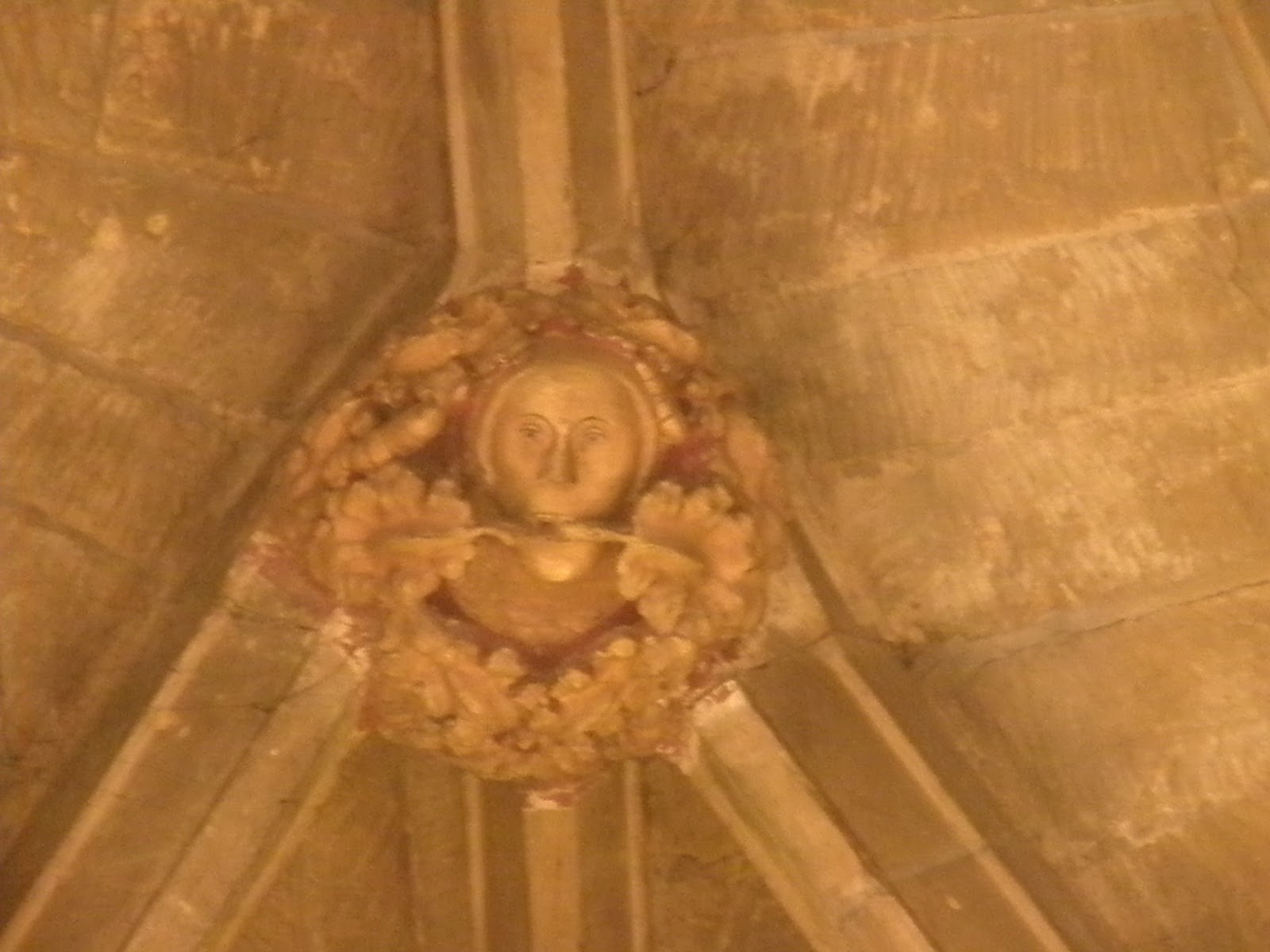