As long as the Earth endures ...

I noticed a theme yesterday in a couple of leading newspapers, about the economic impact of methane release from the Arctic. Now, I may be naive, I may have missed something and I know I'm no scientist, but it seems very telling that it takes an 'economic disaster scenario' prediction to bring this apparently collosal threat to life as we know it, into the news - albeit a few pages in - as though impact on wallet is the only way we can take it seriously these days.

Back in the late 90's, I remember a new theory coming up, from a British geologist, Paul Wignall, that methane gas release from the oceans, caused by global warming, had been a major contributing factor to the Permian extenction in which over 90% of living things died. In short, some rat-like things, a few plants, sea creatures, birds and bugs survived, and we evolved from the rat-like things. There was even a BBC docmentary about it. Two decades have passed and now we are starting to get publicity about global warming causing methane leaks, some highly alarming, such as the Avaaz campaign in preparation for the 2015 Paris Summit.

Natural phenomena came together to cause the Permian extinction. Clever as we are, we seem to be not quite clever enough to put two and two together and notice that by replicating the same kind of conditions ourselves, we can replicate the same kind of effects. It's not, as they say, rocket science. 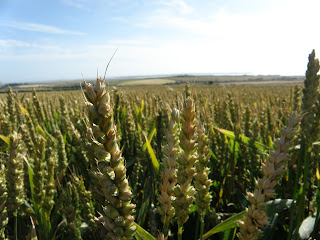 There's a saying, attributed to God, that springs to mind, especially as we approach harvest time in the northern hemisphere, and the celebration of Lammastide.

As long as the earth endures,
seedtime and harvest, cold and heat,summer and winter, day and night,
shall not cease.’
Genesis 8:22 NRSV

At what point, I ask myself, does the earth stop enduring? At what point, do the seasons shift and the harvests fail? They are already failing. There's an account in Genesis, of how (some of) the Ancient Egyptians survived a terrible famine: first they bought grain from the reserves with money - if they had any - then, if they had any, with their livestock, then, if they had any, with their lands, then with their own lives so that in time, they had nothing, not even their freedom, they were slaves in their own land (Genesis 47:13-26). And so it is. The prosperous eat and keep their freedom for longer, but at what point are even they reduced to nothing? It is a question for the West, perhaps, a question for the nations of the world who will be affected least and last by the ravages of climate change- a 'who is my neighbour?' kind of question.
We ask a lot of our Mother Earth - too much maybe. I thought, twenty or so years ago, having (so it seemed) sorted women priests, that the Churches might go on to take up climate change and make it the next great mission, to cherish and take care of the earth, believing creation to be good and of God.

I imagined Christianity rediscovering itself as a spiritually motivated greening movement, promoting simplicity, sustainability, an alternative to consumerism, creative care-taking for the love of generations to come, and respect for the sanctity of all life. It's all there in the Bible and Christian tradition, after all. And here and there, there are churches, websites, books, movements, initiatives, the environment gets a mention in the weekly intercessions ... but on the whole, it still feels like a marginal pursuit. 'Why?' is a question worth asking.

Expressing concerns about the possibility of catastrophic loss of life and agricultural failure - and this is not just curtains for polar bears - can we really only get as far as the economic cost? Is the economy really our frame of reference for meaning? Is there no prayer left, no prophetic voice from our times that will be listened to, concerning the intrinsic worth and beauty of the earth and all life? When the Ancient Egyptians ran out of money to buy bread, the wealthy elite survived and the poor majority became slaves or died. What provision do we make in our own times, to ensure that economics and the survival of the richest is not the end of the story? Besides, survival when all else has died, what kind of richness is that? There's a Cree proverb:


To be honest, I'm a bit weary of other Christians asking me if I'm a Pagan because I care about and find spiritual depth in the earth. I think I want to turn the question around: what kind of insane cult would destroy its own home and habitat and all who share it, and preach freedom to exploit and waste as much as they like, because nothing but the short-term satisfaction of the privilidged few really matters? Nobody would listen to them, surely ...

Wake me, ever-present One,
from my sleepy state of self-absorption,
from the cocoon-like hedeaway of blinkered belief
that persuades me of my spiritual superiority.
Wake me with the sound of the whole earth together
singing and dancing as it has done for ever;
dancing with passion and wild delight
to a drum call I only heard
before in my dreams;
deep-souled song
spanning infinite octaves
from the abyss of despair
to pinnacles of joy;
each creature stamping
and chanting the ecstasy,
the heart-melting tenderness
of life lived in You.
Amen

Annie Heppenstall: The Healer's Tree
Posted by Unknown at 06:26