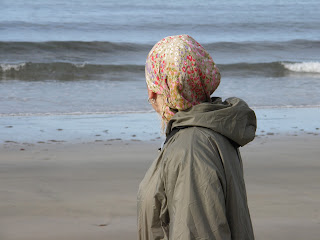 It becomes clear after reading just a little of anything I write that my spirituality is rooted in a love of the natural world and a special affection for the 'thin' places of the British Isles. In some of my books I explore this in a 'Celtic Christian' spirit - although appreciating that this means different things to different people. Reclaiming the Sealskin, Wild Goose Chase and The Healer's Tree in particular draw on folklore and natural history as well as the lives of Celtic saints and holy places associated with them.I'll say more about my Celtic inclinations in future posts.
I also have an association with Franciscan spirituality, St Francis being celebrated as a lover of creation. This interest has emerged implicitly if not explicitly in my last two books, Hiding in God and especially, Rejoice with me.
In his Canticle to the Sun, Francis praises God for sun and moon, wind and water, fire and earth, for their intrinsic worth and his delight in them. Many stories tell of him addressing creatures as brother and sister, thanking them for being themselves, as God intended, and exhorting them to sing and praise God in their many voices.
There is a growing urgency in some movements of Christianty, to deepen our care for the earth, and this, to my mind, cannot happen soon enough. I love the old saying that there are two books by which we can learn about the divine: nature and scripture, and that we need both. Experiencing nature without a wisdom tradition to guide us, we see an amoral world. Reading scripture, shut away from creation, we forget our roots, our true identity. We become less, not more human.
While studying for my Theology degree, in which I immersed myself in the Bible - among other things - my eyes were opened to the way Biblical people lived so closely with the land, and the richness of language, the awe, the glorious poetry that creation inspired. I see the Bible as a treasure trove of imagery drawing on the natural world, and I see Jesus as belonging to that tradition, his teachings richly illustrated by the natural world around him, which could be harsh and difficult as well as beautiful, his preferred place of prayer, a mountain, alone, at night. As I explore especially in The Healer's Tree, care for the earth is a justice issue, it means care for humanity, our children and their children for generations to come, and care for our neighbour.

My love of the earth means I often find an affinity with people of other spiritual paths who seek to respect, cherish and understand the earth and wider universe, and that  includes emerging spiritualities, some of which identify as Pagan. I see it as part of my own spiritual journey to listen to and learn from others, about how they find sanctity and spirituality in the world around them - some might call this finding 'Christ in other'.I hope I can say more about this exploration in further posts.

Christians don't need to go to paganism to love the earth, unless they feel called to. It's all there in our tradition if we look for it, and this is what I seek to bring out in my writing: Greening the Church. But I do feel that Christians could do with communicating respectfully with eco-spirituality people, to look for meeting places and ways to work together on such vital issues. I think it's true to say that many earth-spirituality people do not see care for earth as a priority to the church, but rather, see 'Christendom' as responsible for large scale destruction and an attitude that the earth is simply there for us to exploit while we wait for 'heaven'. Such observations present a challenge to mainstream Christianity, an invitation for a change of heart, and exploration of possibilities for healing of relationship as well as of the earth. One example among many of just such a venture is the Partnership for Earth Spirituality which has a Franciscan root. Closer to home, the UK Forest Church explores the spirituality of the natural world in creative, reflective ways - and I've been delighted to hear recently, that members have drawn on my first book, Reclaiming the Sealskin. Thanks, forest folk!