I went to visit the War Stone today in Birmingham's Jewellery Quarter. I was taking photos for an article I will be writing soon for Mystic Christ, about the Seasons and Elements (this will be the last in a series: Summer and Fire). The trail of thinking that led me to the stone was something like: fire, energy, industry, industrial revolution, iron smelting, railways, railway journey, places I can reach easily from my local train line ... good excuse to visit the War Stone!
But I had wanted to pay a visit for a while, article or no article. There is something about this stone that really speaks to me, and occasionally it seems good to just go and sit with it a while. It's been set on a plinth on the edge of a rather atmospheric old graveyard, with a little inscription, telling the passer-by something of its past. 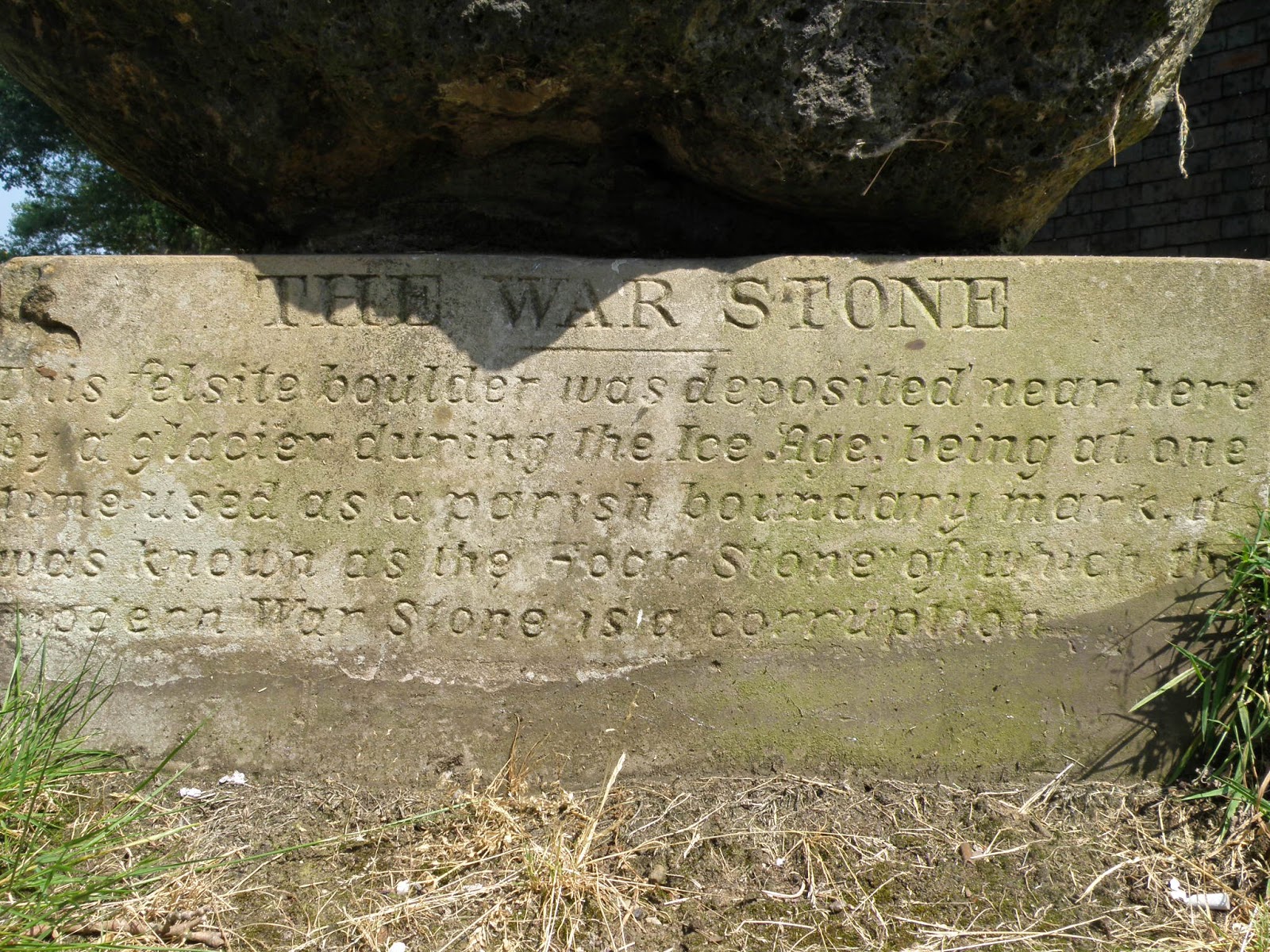 'This felsite boulder was deposited here by a glacier during the Ice Age; being at one time used as a parish boundary mark it was known as the Hoar Stone of which the modern War Stone is a corruption.'


Felsite or felstone is a volcanic rock - so appropriate for my impending 'fire' article. Born of the molten rock in the churning furnaces below the earth's crust, this particular specimen was thrust into place in Wales, to be broken from its parent rock and carried, oh so slowly, by a great glacier, all the way to this little spot, where it was deposited as an 'erratic'. And, amazingly, here it remained.

While the vast elemental processes that formed and moved the rock are mind-boggling, somehow, what fascinates me just as much about this particular stone is the way it has just sat here. Ok, it has been moved a little bit, but not out of the area, and not as much as one might expect, given that it is relatively small. It has sat here, from the time it was dropped, when all around was a bleak landscape of ice and rock. It could have been set down 10 000 years ago, or 100 000 years ago; the information sign is non-committal. 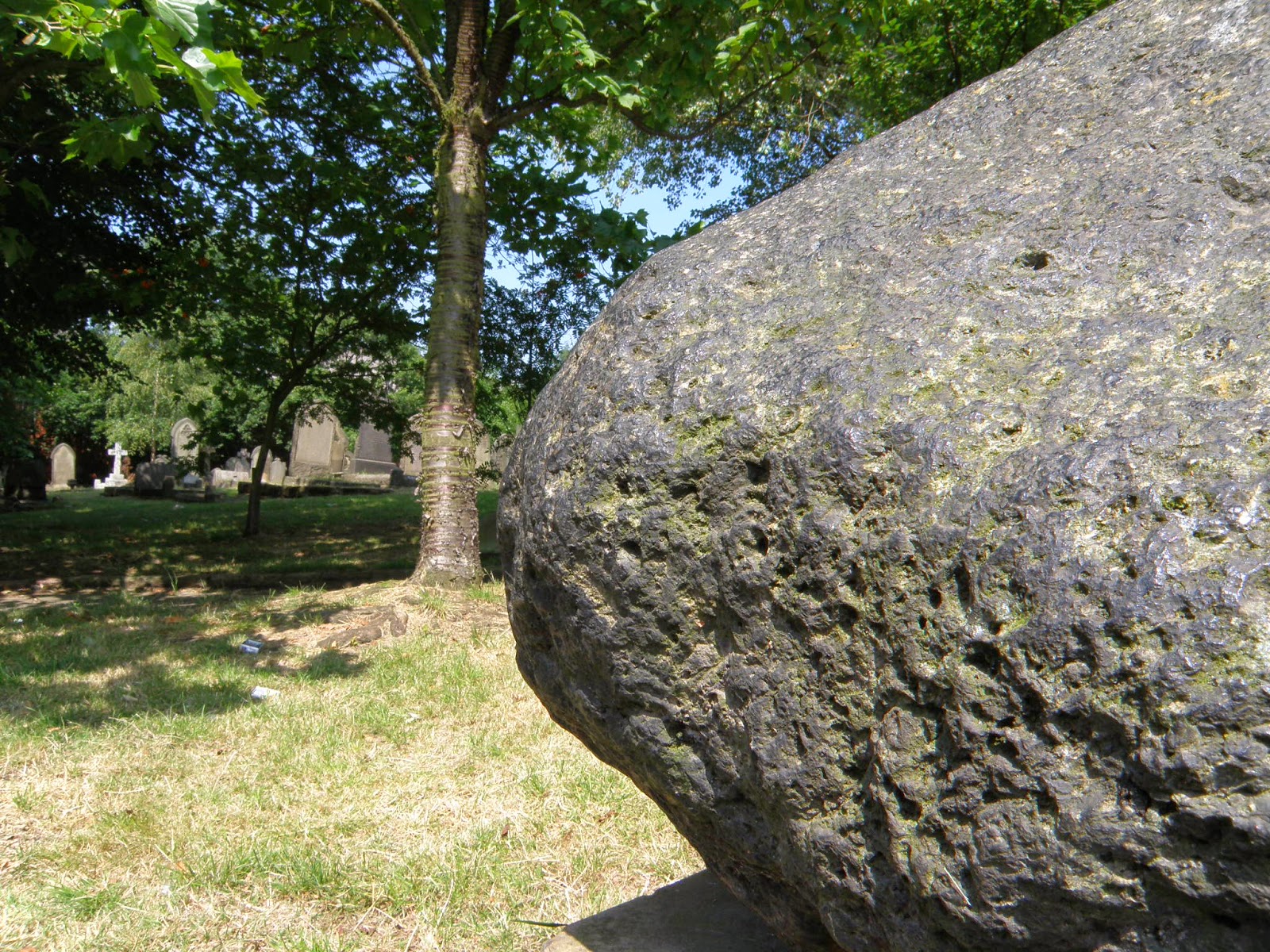 It sat here while the ice gradually receded, while the first hardy trees and patches of vegetation sprouted.
It sat here, as creatures, deer and the like, found their way back onto the land, eating the fresh vegetation, followed by people, tracking the herds. It sat here while the land mass was cut off by the sea.
It sat here before there was any settlement in this region, and then sat some more, as communities came and went, nomadic at first, then staying put for longer periods.
It sat here as tribes and then  kingdoms rose and fell. The Romans came and went, and more kingdoms rose and fell.
It sat here, marking a parish boundary, as the villages round here gradually grew and became the city of Birmingham, and it sat here as a quarry opened up and then closed down, as a railway line was dug and graveyards built ... 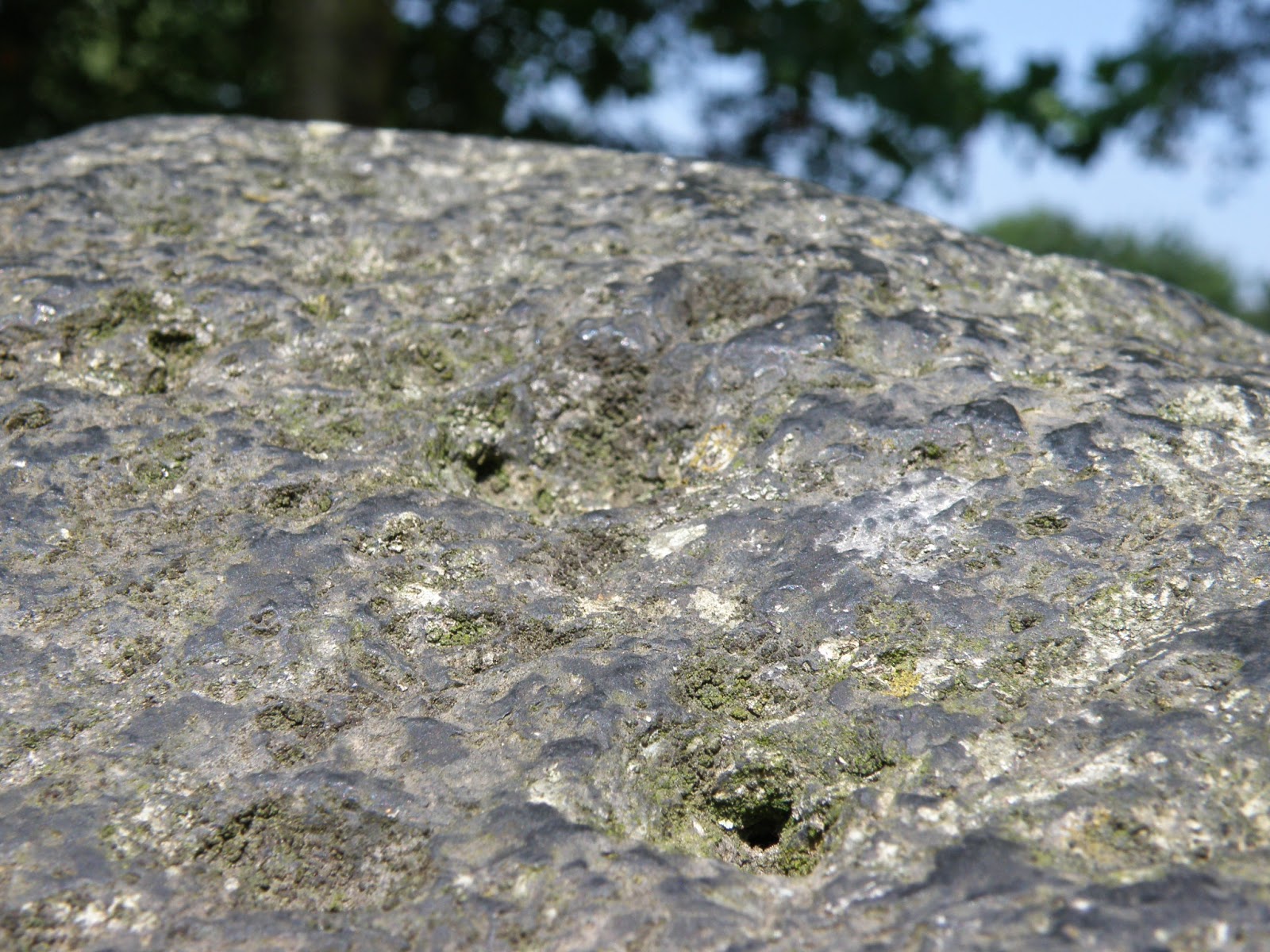 I see in the face of the rock, something of a microcosm of the bare landscape the glacier carved out. It is weathered now, but not in the same way as the tombstones. It is harder, and hosts little in the way of micro-life.
The rock is very dense. I imagine it as having absorbed something of everything that has happened around it, black-hole like. I imagine, and of course this is ridiculous, that it has become more dense, the more it has sat through.

I think I wanted to come and sit with it because of this. The world seems a tense, dangerous place to be at the moment, and I am unsettled. War is all around us and many of us who say we love peace, it seems, still find ourselves struggling with very un-peaceful thoughts, all too easily voicing hasty, angry words, self-righteous sometimes, frightened perhaps, existentially challenged maybe, our faith - if we had one- rattled, perhaps, and every day 'the News', like an alarmed rabbit thumping its hind legs, sounds more and more urgent.

All in all, it's a good day to pause and make time to sit with an old lump of rock. I like to think that centuries from now, whatever state humanity is in by then, the War Stone will still be sitting here. I hope there will be people who still know that the stone is called the War Stone, and who visit it sometimes, inexplicably, when they feel in need of peace and a sense of perspective.

I have some hope, because as I sat, two complete strangers both very kindly offered to take my photo with the stone, recognising it as a local personality, and as I came back to it after a wander round the area, a group of friends were sitting with it having their lunch. The ground around gives clear signs that people come here for a quiet fag or a drink. It is a sitting place and the stone is a definite, welcome presence.

Why such things should give me hope I don't know, perhaps it's clutching at straws - but people simply seem to like the stone and be drawn to its gravity. It has its own attraction, in its quality of just 'being'.
I have heard it said that the Sanskrit word 'guru', a teacher, is related to the concept of heaviness or gravity, a person with true weight - gravitas - to whom others are drawn. Can one adopt a rock as one's teacher, I wonder? Why not.