The sky began to darken around 9am as I made my way towards Sarehole Mill. Ostensibly out jogging ( OK, jog-walk-jog-walk etc-ing), something this morning prompted me to wrap my blowing horn and place it carefully in a rucksack, to take with me. I wasn't sure what I would do with it or where I would end up, I just knew I wanted to be outdoors.


Here and there, people were pausing to look up. The birds sang loudly, as though it were twilight. I jogged on, wishing all of a sudden, to be in the woods.


By the time I entered the woods at Mosely Bog, the light had started to diminish as though storm clouds had rolled across the sun, and I made a complete circuit of the place, clockwise, to see who else was sharing the space: a few dog walkers, blackbirds and robins, ravens and bluetits, a wren and a jay, two squirrels, oaks, birches, hazels, rowan and ash in their ripe-budded springtime potency, holly and yew. 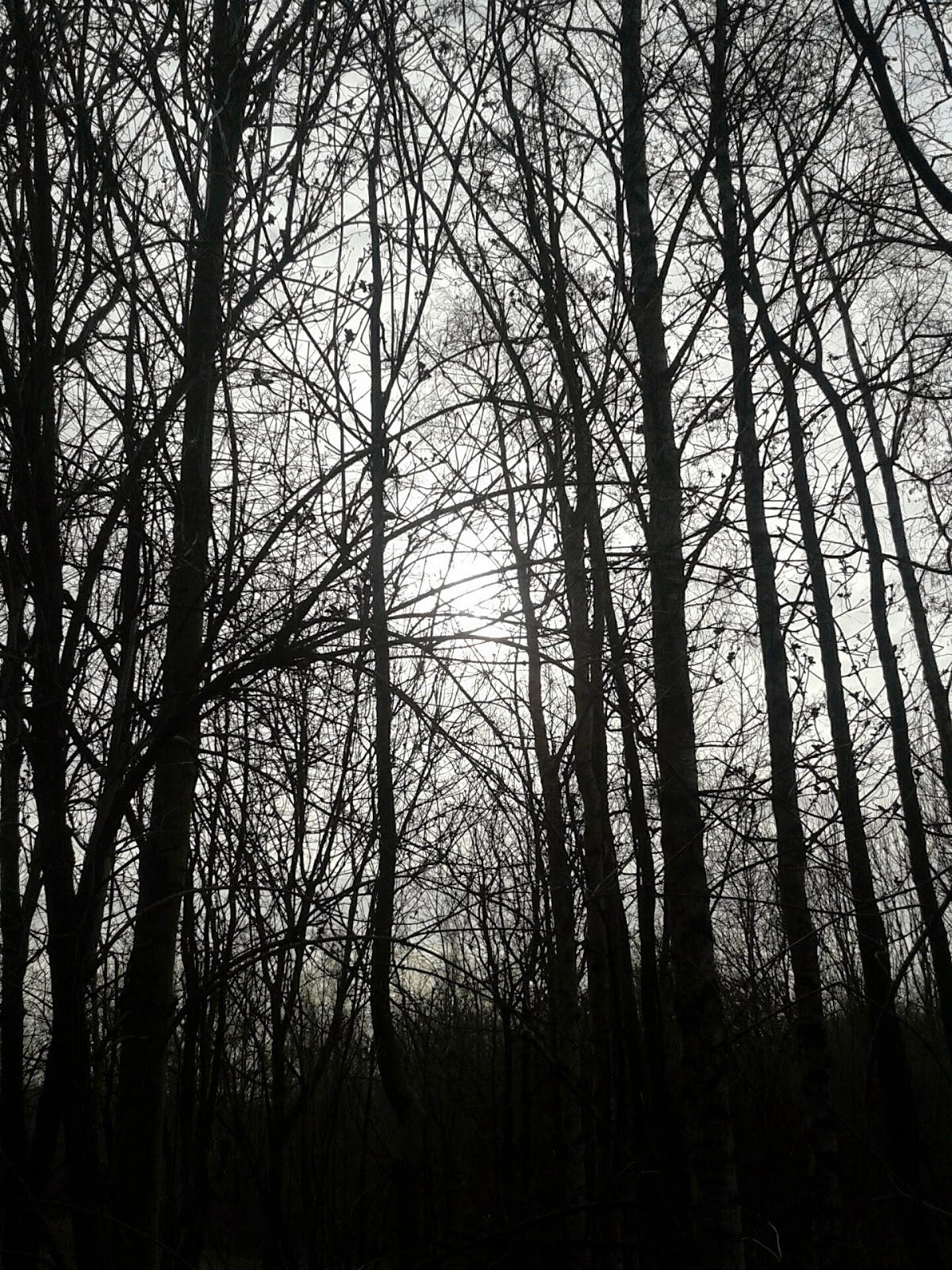 And somewhere, somehow in the air, as always, hung a memory of people long gone, who knew these woods when they stretched out much further and were much wilder. What did they make of such strange happenings as a solar eclipse? What interpretation, what mythology arose in their culture, to make sense of it? Was this moment of greatest gloom honoured with ritual ? Sacrifice perhaps?  Was there an ancestral wisdom that such events come and go? How did they understand the dance of earth, moon and sun?

My circuit complete, I left the boardwalk, heading into the heart of the wood, to sit and be.


Sitting and being, I felt more peace than I have for a long time. The darkness was not complete, a sliver of sunlight shone on, and the woods continued to rustle and sing all around me in the strange half-light. From my hiding place squatting down at the base of a birch trunk among the fungi and leaf litter, it gradually became apparent that the shadow had passed.
Now was the time to stand, feet planted firmly on the damp soil. No word, no 'I am doing this because ...' no invocation, just the raising of the horn to my lips, the deep inbreath, the turning to the sun, and a surge of joy as, clear, strong and bold as a bugle, out spun the sound. In the steady releasing of my breath, I felt an unexpected connectedness with all around me. Four times I blew, and with each out-breath came a wave of feeling - the initial joy, the love of life itself, a desire for peace, a new courage to hope.

Crouched back down against the base of the birch, hidden in the undergrowth, I imagined the sound spiralling out, mingling with the singing of the birds and the wind in the trees, wider and wider into the universe, a great, visceral call - deep soul prayer. A shadow has passed.